Perfect start for Stretton A

Church Stretton A scored a 5-0 win against Ludlow in the opening match of the season. With a sizeable grading advantage on all boards, the home team were favourites and fortunately managed to convert all the points.

Graham Shepherd was the first to finish against an opponent playing his first competitive match. Graham got an early material gain and never looked back. Karl Wakefield made it 2-0 winning his bishop and pawn ending and Gerald Link made it 3-0 shortly after.

On board 2, Steve Rooney's opponent unfortunately touched his king when planning a king move but realised that the square he was looking at was not safe. But having touched his king he had to move it, and was a bit alarmed to realise that in fact the king had no safe squares. His next move allowed  a knight fork so he promptly resigned, making it 4-0.

The Ludlow team then had quite a wait before they could get back down the A49 as top board Joseph Watson was holding Stretton top board Trevor Brotherton in an intriguing middlegame with Watson's knight occupying an outpost contested by Brotherton's bishop, plus the other major pieces on both sides. As the clock ticked down however, Trevor's strength in quickplay finishes clinched the point. having turned down a couple of draw offers, Trevor finally made it a 5-0 whitewash when his opponent slipped up in the queen and pawn ending.

Here is a critical position from Trevor's endgame. Both players were short of time but his opponent tried to simplify with a4, missing the back rank check followed by bxa4 winning a clear pawn. 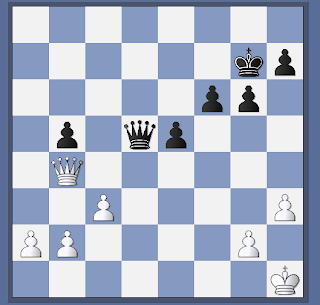 This left the intriguing prospect of whether white's c pawn or black's e pawn would roll forward first. But with less than five minutes each and with queens on the board neither king found it easy to hide. Trevor won a second pawn and with it the game following a slip when his opponent missed a check which forced the queen exchange leaving nothing to fight back with.

Best of luck to Ludlow in the rest of the season, and onward to our next encounter - Priorslee Lions A at home in two weeks, when the B team also get their season underway against Telepost D.