Church Stretton's Francis and Steve Rooney both came away from the Hereford congress last weekend with prizes. Francis took third place in the Minor (U120) and the U100 grading prize, while his dad Steve was equal first in the Open.

Francis (photographed below with the other Minor prizewinners) was undefeated and finished on 3.5 points including 2 wins against higher-graded opponents. He could easily have finished in second place but for a bizarre end to the final game in his section when a local Hereford player resigned because he couldn't cope with the pressure of everyone watching, just when his opponent had managed to squander all of his advantage and create a dead-drawn position. 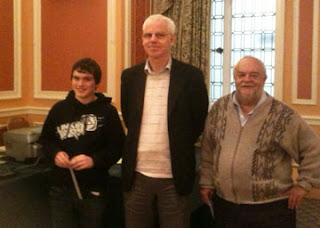 Steve finished on 3 points - not normally enough to win a prize, never mind a share of first place - but the section was a low-scoring affair and was a much weaker field than you'd normally find at an Open. The event suffered from a very low entry overall, perhaps because of the clash with a 4NCL weekend.

It is a well-run congress however at a good venue and the organiser is hoping to run it again next year and if so, maybe more Shropshire players will be tempted to take part.
Posted by Steve Rooney at 18:36 No comments:

Graham Shepherd was captain for the match and he and board one Karl Wakefield secured draws, while Gerald Link, Eric Elwell and Chris Pimm Jones got the wins needed for a decisive 4-1 victory.

Two games left, including an away tie on 5 April at Ludlow which will probably decide the division 2 title. Ludlow have been gifted another 5-0 whitewash as Shifnal & Telford conceded their long-postponed fixture, which is likely to see both South Shropshire teams in division 1 next season. Shrewbury B are still in contention however and will be our guests for our final match of the season on 14 April.
Posted by Steve Rooney at 18:28 No comments:

Our trip to Shifnal & Telford saw us chalk up another win to take us 3 points clear at the top of Division 2, at least for the moment ...

It was another line-up we haven't had before - will we get to the end of the season without playing the same team twice?

An early win for Gerald Link on board four got us off to a good start, which was soon followed by Karl Wakefield winning on board two when Andy Jones' position crumbled under the pressure of two pins. A draw was agreed on board three between Graham Shepherd and Roger Brown which left the two Rooneys to finish.

Francis on board 5 was a piece ahead but his opponent had better activity and gradually used his initiative to grind out a win. Steve Rooney on board one turned down a draw, which would have clinched the victory, but got the full point when Windsor Peck's flag fell in what was then a completely winning position for the Stretton captain.

Three games to go.
Posted by Steve Rooney at 14:22 No comments: