Anyway, the league season continues to go well. The league tables are suffering from quite a few postponements which means that teams have not played the same number of matches, but our B team is top of division three and the A team second in Division two with a 100 per cent record so far.

The B team has won five of its six matches, only conceding a draw to second-placed Newport B. Its latest victory was a 3-1 win against Newport Juniors

Meanwhile the A team is enjoying a 100 per cent record from its three games but has had two matches postponed so will have a lop-sided season with eight games now scheduled after Christmas, compared to four in the first half. The next A team fixture is against Telford B who are currently top and one of the sides to watch in Div 2.

In the Rapidplay competition, Church Stretton had a good first match night hosted at our club, but a less successful affair away at Priorslee when we were without Trevor. Next Rapidplay fixture is on 12 December at Shrewsbury.
Posted by Steve Rooney at 13:23 No comments:

The A team chalked up its second win with a 5-0 victory over Telford C. To be fair, we did outgrade our opponents on all the boards but it was satisfying to get a clean sweep and you never know if it might come in handy for points' difference at the end of the season.

Trevor started the ball rolling with a comfortable win and was followed by Eric who had won a piece early on. David had what looked like an overwhelming attack on a strangled king position and finished it off neatly. This left just Karl and Steve who managed to grind their opponents down in the end.

A good start, but no time for complacency as there are some tough matches to come with several teams that will provide strong opposition.

B team start with a win

The B team started its Division three campaign with a good win away at Oswestry. David Graham and Tom all won and John Westhead drew for a 3.5-0.5 result which puts them at the top of the table.

A fun evening at the club this week when Karl brought along his giant chess set for us all to see. And when he said it was a big set, he meant it! The kings are about 12in high and the giant board has six-inch squares on a bespoke table made by a local cabinet maker.

It's a beautifully-made exhibition set and would be ideal for use at a special event. (Might try to persuade him to bring it the the Shropshire congress in January.)

Here are some photos of the set in action. (The white king in the middle photo is from a standard-height chess set to show you the scale.) 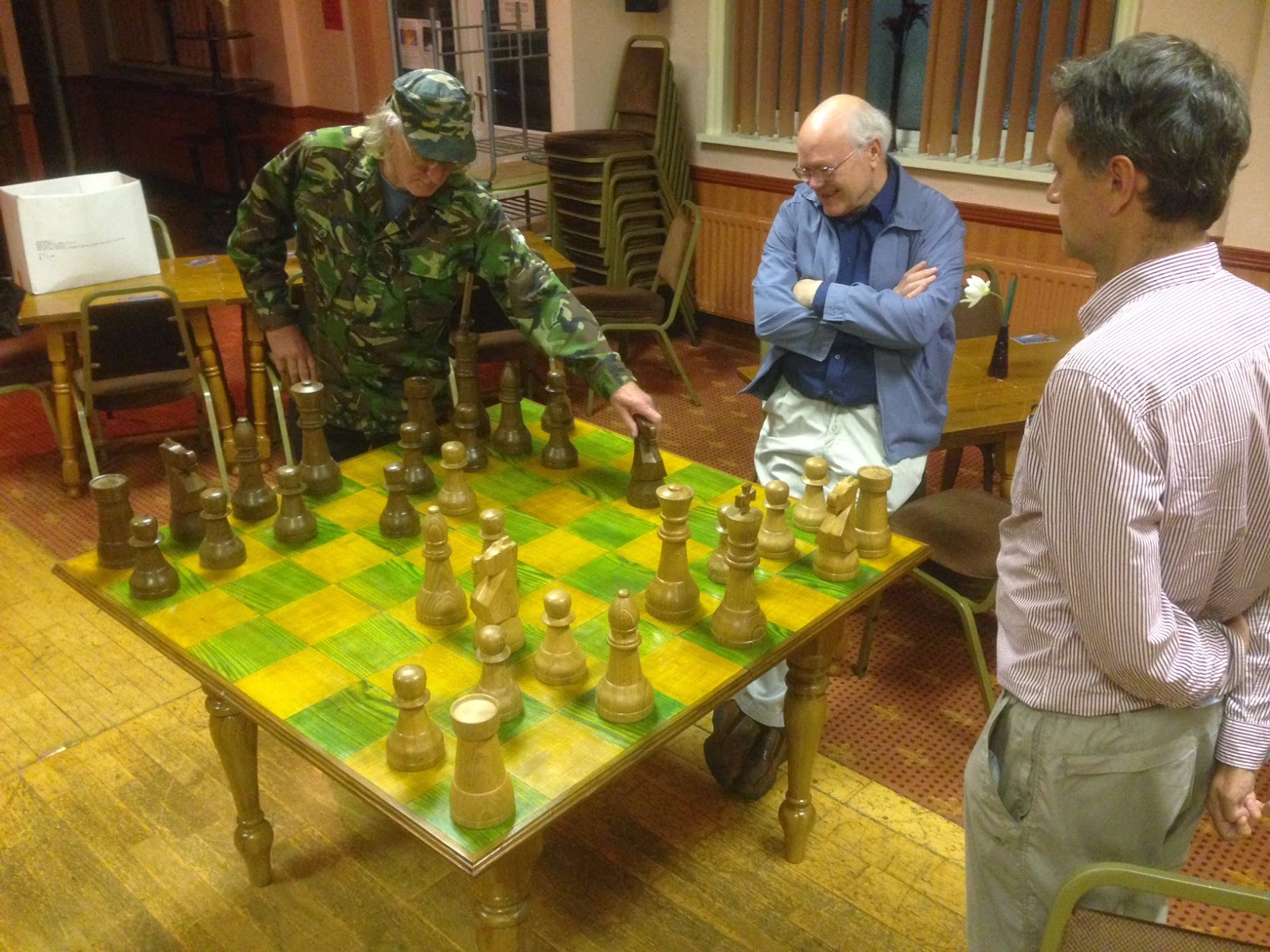 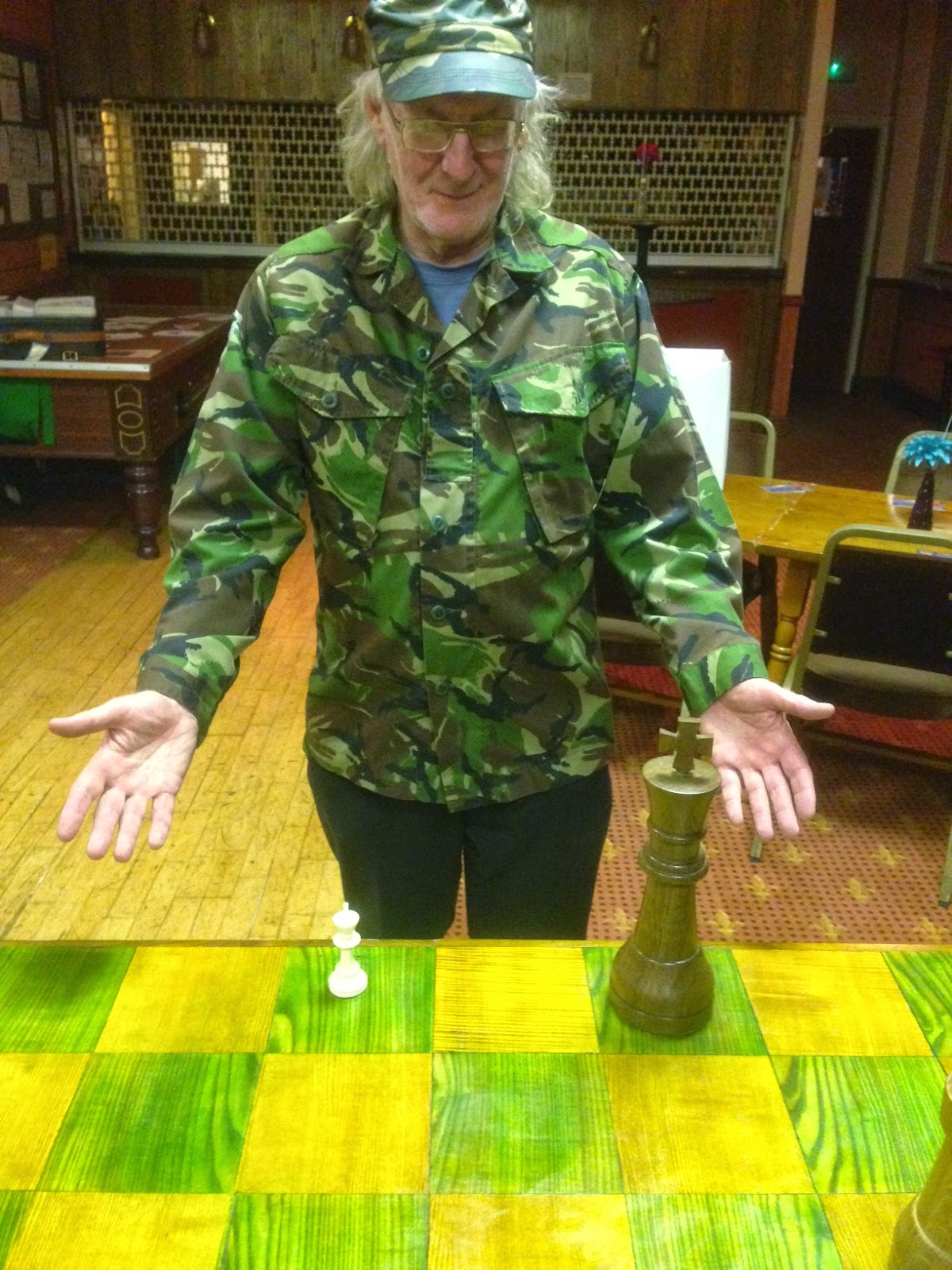 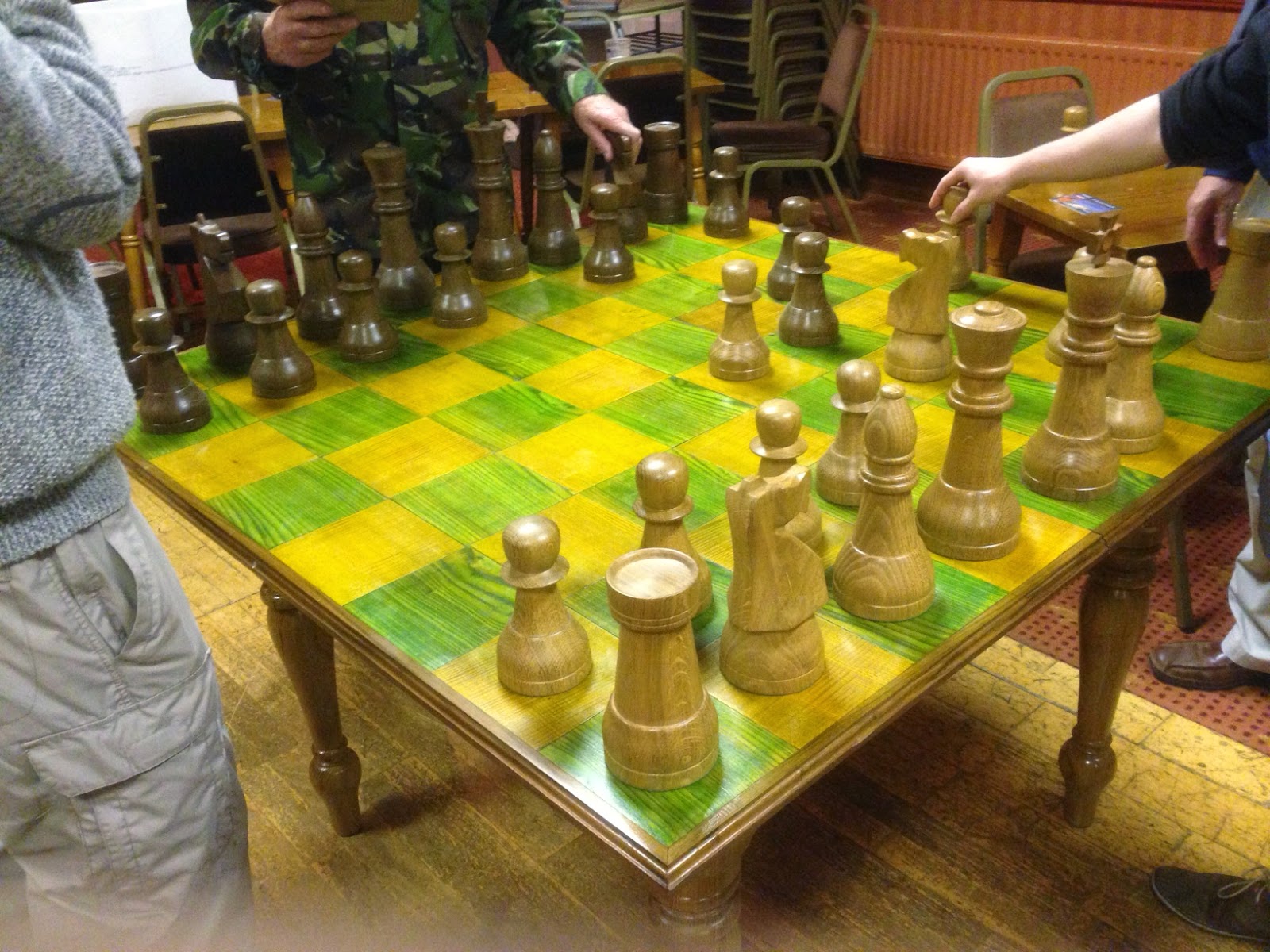 Posted by Steve Rooney at 17:30 No comments:

Starting with a win

Our first match in Division two saw a 3.5-1.5 victory for the A team away at Telepost B.

Firstly we should wish a warm welcome to David Hodge who played his first game for us, and his first competitive match for a number of years. He started off with a fine win having emerged a piece up early on and calmly converting the point. Karl drew with John Westhead after what looked like a slight advantage disappeared in the rook and pawn ending, and Francis saw an opportunity to swap in to a won ending a pawn up with his knight being far better than the opposing bishop. Francis' win took us to 2.5 points.

Steve eventually lost after battling for half the game having mis-read some tactics and being basically outplayed. Trevor was last to finish in another ending with knight v bishop where the knight was better. Keith was probably dazzled by the knight hopping all over the board in the emerging time scramble and slipped up to let Trevor's king in behind the pawns and it was all over. A decent result, particularly given the fact that half way through there was little advantage showing for our players.

Trevor takes us on

Church Stretton's top board, Trevor Brotherton, is taking on allcomers at the Church Stretton club this Thursday 11 September. He will play simultaneously against club members. Starts at around 7.30pm.

After a season playing at the Condover venue, the club is returning to the Church Stretton & District Club in Essex Road for the start of the 2014-15 season.

We are delighted to be back at our old venue, but also very grateful to John Casewell and the Condover club for accommodating us last year. After captaining the B team and only just being squeezed out of promotion last season, John will remain a member of the B team for the coming season with Tom Williamson taking over as captain. Steve Rooney will captain the A team.

For 2014-15 we will once again field two teams in the league. The A team is now in Div 2 but determined to get back to the top division very soon. We will also be running a team in the Rapidplay league.

An internal club competition will also be launched this year with the agreed format being an all-play-all at Rapidplay times (20min  or 10min + 2 sec per person following the Rapidplay league times).

The league fixtures have just been published - see column on right.

The club meets on Thursday evenings from 7.30pm. Regular members will need to join the District club at its modest rates, although guest members are very welcome so if you fancy trying chess or are a returning player, you will be very welcome.

The club starts from this Thursday 4 September.

See you there.
Posted by Steve Rooney at 16:22 No comments:

Out of our hands

Our final match of the league season was arranged a week early, thanks to a sporting gesture from our opponents Priorslee Lions A as we would have been without three of the team for next week's original date.

In the event, the match was a close one, but having been pipped 3-2, we now face an agonising wait to see if Telford manage to scrape any points against Shrewbsury A in their final match on 4 April.

The match started with the home team a player short. Steve Tarr was missing on board four, although one of our team had seen him at the weekend and we were all fairly certain he was going to show up. Around 55 minutes later it was looking increasingly unlikely, but he then walked through the door, held up by a late taxi pick-up. I was pleased that there was no default given the row about the  incident in an earlier match.

Trevor managed to get our first points when his opponent seemed to go into self destruct and trap his own queen. This was soon followed by a home win however as Michael overlooked some tactics on board four and ended up a whole piece down with no compensation.

I was the next to fall, transposing into an ending that I thought I could hold even if my isolated pawn was gobbled up, but I was wrong and despite having a bit of fun with a rook pair, it was to no avail.

Two games left and we needed a win and a draw to level the match. Francis continued his excellent run for the A team and gave his opponent no opportunities at all before winning an exchange and then going on to prepare a mating trap. (In this league season, Francis has chalked up 90 per cent with 4.5/5 in the A team, as well as 86%, 9.5/11 in the B team!)

The match was now two-all. Graham on board three was ahead on time but lost a critical pawn which in the end was enough for his opponent to convert.

The result leaves us still sitting just one point above the drop zone in division one, but Telford A only need a draw in their final match as they have a lead in game points. Just have to sit and wait now.

After four losses on the trot, the A team finally secured some vital points with a win at Priorslee Lions B. Our opponents might be relegated already but that didn't stop them putting up a strong fight, despite us going one up straight away due to a default.

Graham sportingly agreed to take the defaulted board and expected to be popping home early, but the thrilling finish kept him there right to the last move.

Early on it looked fairly comfortable, Eric was in a strong position and Trevor seemed to emerge from the opening with an advantage. But suddenly it all started to go wrong. Eric's opponent managed to activate his rooks which were soon charging down the g-file and the tables turned. Eric eventually lost after having  refused a draw offer, partly in response to my pre-match warning that we needed to win this match and all boards were vital. We were now two-down.

My game on board two was now full of tactics as Gary White played his usual sharp stuff, including the obligatory g4-g5 pawn advance. Suddenly I noticed Trevor re-setting the board and was shocked to find that he had lost putting us behind. Michael was up on time and seemed slightly better although I only had time for a cursory glance.

My game moved into a critical phase and Graham managed to wave a scoresheet at me to tell me Michael had won, putting the scores level.  My clock showed about one minute to Gary's seven but somehow the moves were easy to find after I won some material and then sacrificed my queen for a knight to rid him of any mating chances. With two rooks, bishop and pawn on the sixth rank against his queen, and my king safely tucked in the corner guarded by one of the rooks and the bishop, I managed to force the pawn through and deliver mate with 14 seconds to spare.

Phew! A win means we might avoid relegation after all. If we'd lost that game it would have been curtains. But Telford can still catch us if they get at least two points from their remaining two games.

We visited Telford C on 15 Jan knowing that whoever won would move to the top of the league.
Charles Micallef won on board one against Richard Szwajkun,who apparently helped by making a couple of weak moves.Francis Rooney on board 2 seemed to have the upper hand against Andy Jones and so it proved 2-0 up and both my game and Toms looked promising.However,in my case we got down to six pawns each and I ended up in a zugswang position.Then sadly Tom ran out of time leaving the match drawn,and the league table now has four teams joint top with eleven points.
Posted by Unknown at 10:47 No comments:

A good start to second half

A win against Shrewsbury A proved to be sweet revenge after their drubbing of us in this season's opening encounter. The return match at Shrewsbury saw us win 4.5-0.5 with four wins and a draw.

Shrewsbury were without one or two of their srongest team, but we were missing Michael as well. Early on we looked comfortable on most boards but there were no quick finishes. Graham, Francis and Eric finished within moments of each other and Graham tapped me on the shoulder and reported that we were 2.5 to 0.5 up. With my position looking good and Trevor steaming through the centre next to me, the win looked assured. We both managed to convert the wins to leave Shrewsbury a little shell-shocked.

All we need to do now is repeat the form, and the luck, in our next two matches against the other  top-three teams Telepost and Newport.