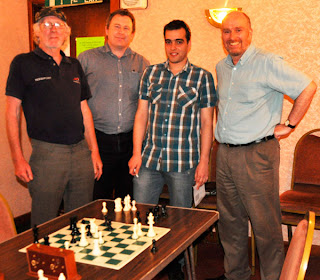 Church Stretton A won the final of the summer cup competition, the Cox Trophy, beating higher-rated Newport A by 2.5-1.5  in a match played at Telepost's club last night.

Early wins for Tiago Faustino and Karl Wakefield put Church Stretton 2-0 ahead. Karl was the first to finish as he converted an endgame initiative on the king's side into a strong passed pawn which tied down Chris Lewis' rook that was eventually lost and with it the game.

Tiago made it difficult for himself, not for the first time this season! His queen side was under a lot of pressure and he sacrificed the exchange to try and hold it but then decided to plonk his queen in enemy territory on b2. His opponent, Nathanael Paul, was convinced the queen was vulnerable as her retreat was difficult and he spent a lot of time trying to conjure a trap but it never materialised. With Tiago's queen eventually escaping back to e7, Nathanael quipped "maybe Mr Fritz can solve it later". He then faltered however and after some simplification Tiago emerged two pawns up with a ishop pair against bishop and knight and the end was inevitable. Another great escape for Tiago as he continues an unbeaten run that stretches back to his first matches for the club in January.

Trevor Brotherton's game against county number one Nick Rutter on board one had begun with some comical retreats with both players returning knights to their starting squares in a slow-burn French defence. Trevor continued the theme by slow marching his king to b7 rather than castling, as he needed the rook to remain on the a-file. A battle then ensued with Nick throwing his pawns forward on the queen side. Trevor's knight outpost on b4 looked reasonably solid protected by another knight and a bishop, but it was to prove an illusion as Nick conjured up an exchange sacrifice to eventually break through with a fatal attack on the king.

This left captain Steve Rooney facing Gavin Cooper on board two and needing at least a draw as a 2-2 tie would have given the match to Newport under the countback rules. In the last encounter between the two at the start of the league season, Steve won in a tense time scramble and this game also went to the wire. The black squares were the key feature with Gavin trying to undermine white's pawn chain from c3 to e5 in a game that started out as a Pirc defence but resembled a French. The black-squared bishops parried for a while but when they were swapped it left a potential weakness in black's position which Steve's queen could exploit. The game then revolved around Gavin attack on pawns on a2 and c3 and Steve's threat to force a series of queen checks by invading on the black squares. Gavin turned down one draw offer but eventually realised he couldn't break through and offered one himself when both players were down to the last five minutes.